"Old guys" are not welcome at Queens University

If you are an old guy at Queen's, security will get your ass out of there! This is not hyperbole ... it happened to me.

I started following Men's Issues after I stumbled upon, and filmed, a student protest of Dr. Warren Farrell in November 2012. Since then I have attended and filmed Men's Issues events at the University of Toronto, Ryerson University, Queen's Park, University of Ottawa and other places. No official, organizer, police officer, or security guard ever tried to interfere with my attendance or filming of these events. In fact, organizers have gone out their way to
grant media access to the speakers and events, some of which were hosted by the Canadian Association For Equality, student groups, and the activist group, A Voice For Men.

I have certainly heard strong rhetoric, of the sort commonly seen at protests, from Men's Rights Activists (MRAs), but I have never witnessed an MRA indulge in any form of oppressive or disruptive activity at any of the events I filmed. But opponents of men's rights have been vocally abusive and physically aggressive to the speakers, organizers and attendees at most of the events I attended. Feminist protesters pulled fire alarms, and blocked or shutdown events to such an extent that police, fire fighters and security guards had to get involved.

A new dimension to this story emerged recently at Queens University, and some background will provide helpful perspective. Dr. Janice Fiamengo, University of Ottawa, was invited to give a lecture entitled "What's Equality Got To Do With It" by the newly formed Queen's Men's Issues Awareness Society (MIAS). In order to block this lecture, campus feminists filed a motion to have the MIAS group de-ratified by the Alma Mater Society (AMS). The motion failed to win the necessary 66% vote, so the lecture would proceed and attract a standing-room only crowd.

I set up a Live Event Hangout On Air (HOA) on YouTube channel StudioBrule and filmed Fiamengo's lecture at the request of the organizers. Many viewers watched the event in an upstairs over-flow room. Needless to say, students and the wider community were intensely interested in what Fiamengo had to say.

Queen's philosophy professor Adele Mercier attended Fiamengo's lecture and expressed her contempt for the event to a cheering crowd, many of whom were students of hers. Mercier asked that Men's Rights activists give her a chance to speak at a separate event, and a separate event entitled "What's Feminism Got To Do With It," with Mercier and writer Jaclyn Friedman as speakers, was quickly sponsored by OPIRG, and organized by the Levana Gender Advocacy Center. I decided to attend and hear her side of the story, as she had suggested at the Fiamengo lecture.

How naive of me.

I arrived at the Biosciences building early on April 8 in order to get my equipment set up, as I usually do for an event like this, and waited in the lobby with my camera gear, hoping to get a quick interview with the speakers. After some time I was told that Mercier had withdrawn. A short while later a security guard informed me that no filming would be allowed in the auditorium. I immediately assured security that I would not film anything in the auditorium. I also asked again for a quick interview with the remaining speaker and an organizer assured me that she would ask Friedman, so I waited in the lobby.

I didn't have to wait long, but it wasn't Friedman who came to see me. Two security guards had been dispatched to physically remove me from the building. Keep in mind that I was just standing quietly in the lobby, about 200 feet away from the auditorium and around a corner, out of sight of the entrance. I had barely spoken with anyone up to this point.

Here is why I was singled out for exclusion by Queen's University:

Feminist student, Erin Alexandra, posted to the public Facebook event page that "whatshisface old guy who took a lot of pics at the Fiamengo event is here with all his 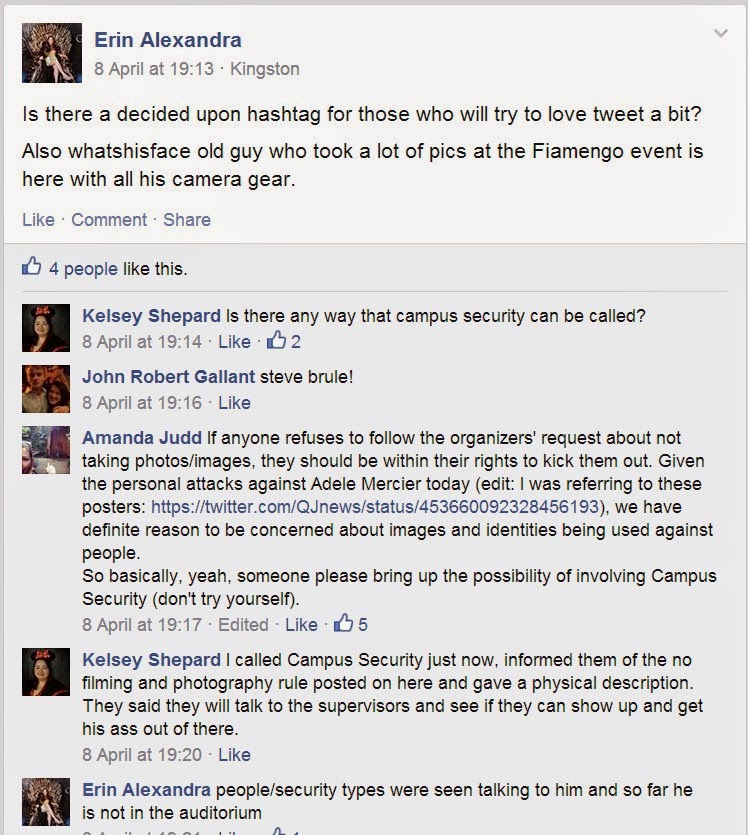 camera gear." Student John Robert Gallant quickly posted my name to the Facebook page, whereupon Kelsey Shepard called security, gave a physical description of me, and suggested that security would "get his ass out of there."

And "get his ass out of there," is exactly what security decided to do.

I was not to be allowed into the auditorium under any circumstance, and to make sure that I got the message, I was to be escorted out of the building. I asked security "what if I say I am not going to leave?" The security guard instructed me that he would call Kingston Police, who would remove me by force.

This action, endorsed and enforced by Queen's University, which I attended as a student last year, was taken for one simple reason: a feminist ideologue identified me as "whatshisface old guy" and instructed Queen's Security to "get his ass out of there."

Can anyone at Queen's University spell "discrimination?" How about "bigotry?"

It's important to remember that my crime was to stand within 200 feet of the auditorium entrance, holding my camera. There were a great many people holding cameras at this event, after all, nearly every student has a smartphone.

I contested this decision at length with one of the Security guards, and asked to speak with whoever made the decision to eject me from the building. Eventually the director of security appeared. The director was adamant that I was to leave the building. After another lengthy, exasperating and fruitless discussion, I asked if I could at least sit in the lobby and see if anyone would grant me an interview when the event was over. He reluctantly agreed to ask the event organizers and was gone for 10 or 15 minutes. Upon his return he told me that the event organizers authorized me to sit in the lobby as long as I point my cameras towards the wall.

While I waited, the director of security repeatedly questioned my legitimacy as a documentarian and journalist. He suggested that I was connected to Men's Rights groups, as if that should make any difference. It definitely should not matter but, for the record, I am not a member of any advocacy group, and I told him so. The director was not convinced and it seemed to matter greatly to him. I will admit that the material that I have published looks really bad on feminist protesters, and reveals the abuses endured by MRAs, but these are accurate representations of the events that I have witnessed.

Feminists have sent me many angry emails, attempted to have YouTube remove my material, and tried to intimidate me by filing police reports in the past, and indeed after the Fiamengo lecture at Queen's. The police, YouTube, and most university officials have rejected feminist attempts to coerce them into trampling on my rights and freedoms, but Queen's University? Not so much ...

The director of security at Queen's University said that if he ever finds me filming on Queen's Campus again that I better be carrying a press pass, because he will ask to see it. Many people would find this comment threatening or intimidating, and I was dumbfounded. There must be hundreds if not thousands of cameras carried by students and former students, like me, filming on campus every single day, but the director of security decided to single me out.

It doesn't seem to matter to the director that no one requires a press pass to practice journalism in Canada, nor does a press pass confer any special rights upon it's possessor. But that's not the point. The very clear message was that I am not welcome on campus at Queen's University under any circumstance. The director of security was going to be looking for me because an ideological feminist instructed him that "whatshisface old guy" should "get his ass out of there." The director of security got his orders from an ideological feminist student and he intends to carry them out.

This is what "inclusive" means to feminists. This is discrimination. This is bigotry. This is Queen's University.

As a former Queen's student, I am deeply disappointed.