This is the first in a series about the myths and realities of feminist history.

False notions persist about the feminism of the past. Last fall, an article in the conservative web-magazine World Net Daily set up a predictable contrast between the “reasonable” feminism of the early 1900s and the unreasonable movement that took hold after the 1960s.

Author Hanne Herland claimed that “the early women’s movement fought for equal socio-political rights and respected the differences between the sexes.”

Why I am Still an Anti-Feminist - Janice Fiamengo

My first video was Why I am an Anti-Feminist. I addressed the double standards of intersectional feminism, which divides the world into oppressor and oppressed, with the oppressor always powerful, privileged, and blameworthy, the oppressed always powerless, innocent, and admirable.

The ideology promotes feeling over reason, sanctifies members of allegedly oppressed groups; and vilifies allegedly privileged men, especially white men, justifying discrimination against them, and the denial of their rights and humanity.

In the videos that followed, I showed how intersectional feminism breeds deep personal and social dysfunction. It teaches members of alleged victim groups to hate alleged oppressor groups and to compete with one another for superior victim status and the perks that come along with that.

Victim status has become a much-coveted badge of authenticity and power, so much so that countless numbers of people, particularly women, pretend to be victims, in order to achieve the right to accuse, blame, punish, and destroy others, primarily men. Our society in general believes their victim claims, and law and social policy aid them in their vengeful actions.

Six and a half years after that first video, things are worse today than they were then, and the project that intersectional feminism unleashed is further advanced. Back then it seemed the tide was turning or at least might be made to turn. I was never very optimistic, but now I am less so.

Now we are in the midst of a world-wide contagion of fear and loathing in which mass scapegoating and the demand to be made safe have overtaken a large segment of society, and in which the weakening of men and the promotion of rage and hysteria are bearing their rotten fruit: today we witness the discrediting of freedom, of reason, of individual responsibility, courage, and decency; in their place we see the promotion of superstition, authoritarianism, cowardliness, virtue-signaling, and sadism.

Over the past year, I’ve spent more time than I wanted reading about viral load, spike proteins, and vaccine mandates, and in that time, one thing has become clear. Our present never-ending fear-mongering, spiraling accusations, and demands for compliance could not have developed without social justice ideology, which has created majorities in the western world willing and eager to give up every freedom in return for the promise of safety and the comforts of the collective—and few people able to oppose the trend, at least in some part because of the emasculation of men and the unleashing of female rage.

There are a lot of people talking about our present situation, many with more expertise than I. But few fully realize how long our situation has been in preparation. We think that things went wrong in the last decade, perhaps the last two or maybe three. Most of us know little about the conditions that pertained in the past because of the propaganda we’ve all been fed. Even our own memories come to seem dubious. 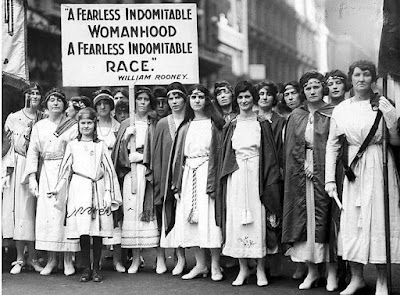 Over the next year, I will offer a series of videos and essays providing glimpses into the little-known history of intersectional feminism to help make sense of our own time and to explore how thoroughly the ground has been prepared for our pacification.

I present my findings in the hope that together men and women of good will can have a fuller understanding of how we got to where we are now and how we can imagine a better future. I hope you’ll find them interesting.