The first International Conference on Men's Issues, organized by A Voice for Men (AVfM), proceeded at the Veterans of Foreign Wars (VFW) in St. Claire Shores, a suburb of Detroit, Michigan, without protest or serious incident this past weekend despite earlier protests,
death threats and promises by feminist groups to shut it down. It was a great location along the Lake St. Claire and an old car rally showed up on the weekend as well ... Bonus!

Speakers included living legends like Erin Pizzey from the UK and Canadian Senator Anne Cools, who knew of each other's work since the 1970's, and subsequently became such great friends that they now call themselves "Soul Sisters." Other famous writers, intellectuals and activists included
Dr. Warren Farrell, Stefan Mollyneux, Karen Straughan, and Barbara Kay. Still others came from as far away as Australia and India. The full list can be found on the AVfM website.

These speakers did not disappoint. The talks spanned the full range of human interest and emotion from intellectual, passionate and compassionate, to hilariously funny when Stefan Molyneux had the crowd in stitches with improvised jokes that demonstrated "the crazy" in feminist assertions about patriarchy, domestic violence, rape culture and more. I recently filmed Molyneux's serious academic talk "Bomb In The Brain" at the 2014 DV Symposium in Toronto, so I was truly surprised at his hidden comedic talent. Now I'll think of him as the "Bill Burr of Canada." I'll be posting some of this to YouTube soon on Studio Brulé, don't miss it, it's hilarious!


Other speakers, including Dr. Tara Palmatier, who says that she is terrified of public speaking, also found their inner comedians at this event, which was fortunate for the attendees since the issues described in detail at this conference can seem depressingly insurmountable at times, especially since there has been nothing but ridicule and antagonism for Men's Issues from mainstream media. In fact AVfM and other men's groups have been subjected to near-continuous slander and misrepresentation so, to twist an old saying, "take two jokes and call me in the morning," was good medicine to help the audience cope with the often painful material.

It should come as no surprise that Men's Issues are often intertwined with Feminism, after all it is feminist lobby groups who were behind massive social changes like: VAWA which denies the reality of violence against men in domestic relationships; Title IX which has eliminated popular college sports programs for men, like swimming, diving and wrestling; the creation of a culture-wide rape hysteria that eliminates due process for young men, particularly on University campuses; the promotion of outright lies like the so-called gender pay gap; and feminists have promoted such an enormous culture of fear that men are no longer permitted to even sit beside children on many airlines. And yet many in the media feign shock and surprise when feminism is criticized by a men's group! Well, all rightttyyyy then, I suppose they will also be shocked and surprised when the Diabetes Association criticizes junk food dispensers in primary schools? Of course not ... it's safe to criticize junk food, but it's not safe to criticize feminism, and few in the media have the courage to upset their advertisers or offend feminist ideologues.

Erin Pizzey has come to refer to the multiplicity of influential, well-funded feminist organizations that span the globe as the "Evil Empire," while Senator Cools emphasizes that men and women will always fall in love with one another despite the damage done by feminist distortions about relations between the sexes. Distortions that some speakers claim have contributed to a culture that celebrates, predominantly female, narcissists, as evidenced by the popularity of the "Real Housewives" TV show.

Media from MSNBC, Vice, and many more attended, interviewed, filmed, and photographed just about every square inch of the event. The stories to come are likely to present vastly different views of this conference, which I can summarize as: highly informative, passionate, at times very funny, but most of all, absolutely essential in order to break through the stigma created by 40 years of feminist misinformation designed to shame and silence men and women who want to discuss social issues in a culture that increasingly views men as entitled, rapists-in-waiting who are an immediate danger to children on airplanes.

After hearing these well-researched, insightful lectures, it would take a special kind of willful ignorance to deny that the serious issues facing men, boys, and women and families were at least partly, if not entirely, created by decades of feminists promoting an image of men as violent and dangerous to women and families. In fact many feminists now define rape to include anything a man says of a sexual nature that a woman does not want to hear. Yes, they use the word "rape," and examples of this will appear in upcoming videos on Studio Brulé.

AVfM surprised everyone by providing a free banquet dinner on Friday evening and presented Erin Pizzey with a well-derserved "lifetime achievement" award to the delight of attendees. The banquet was open to all, including the media. It was a delightful affair that also featured a birthday cake and Happy Birthday sing-along for Warren Farrell.

The banquet was an unqualified success. Old friends were re-united, new friendships were formed, and people who only knew each other online met for the first time. It was a genuine celebratory evening, which continued at various local pubs later. More pics are added at the bottom.

AVfM was completely open with journalists, even those from organizations typically antagonistic to Men's Rights activists, like Vice. All media attendees were given full access to the speakers, to the banquet, and even to the room used by AVfM staff, so that we would have ample opportunity and space to conduct interviews without interference. This stands in stark contrast to events hosted by feminist organizations, who will typically enforce a strict lock-down on the media and ban journalists who do not have a track record of enthusiastic adherence to feminist dogma. Considering the history of antagonism and misrepresentation that AVfM has endured, it was courageous of them to be so completely open. Some in the media will undoubtedly quote a poorly-phrased sentence out-of-context, and use it to undermine the entire conference and Men's Rights movement, after all, their readership expects nothing less than a total smack-down of these uppity men. But one thing I can say about the men and women at this event, they have the courage to speak their minds openly even knowing that they will likely be misunderstood, misrepresented, and hated, sometimes by the very people they are trying to help. And this is why a group of women who love and support men have chosen to call themselves "Honey Badgers," an animal known for it's complete lack of fear. "Throw your worst at us," says Honey Badger Karen Straughan, "call me a misogynist, a rape apologist," ... "we don't give a fuck" what you think of us. These Honey Badgers are tough-as-nails, forthright, bad-ass women. Ya gotta love it!

The conference ended with a panel discussion on activism in which each of the panelists gave an account of their experiences and the various ways that people can get involved. Social worker Adam McPhee recounted how his attendance at Dr. Farrell's Toronto lecture in November 2012, and the bizarre, now-infamous, protest, actually prompted him to join the Canadian Association For Equality (CAFE). McPhee is now a board member and was quickly approached by various organizations to talk about CAFE. Janet Bloomfield, aka "Judgy Bitch," described herself as a "Twitter activist" and gave an example of how she reached millions of people that very weekend because her tweet was re-tweeted  by some prominent Twitterer.

One solitary protester, who goes by the name of “Lissie DarkHorseSwore” on YouTube and "SworeByThePrecious" on Reddit, did appear during the event and carried her sign for a few minutes. "Lissie" started "Project Dark Horse" apparently with the intent to "infiltrate" and "get the dirt" on AVfM, whom she has antagonized in the past by making a false report of fraud to the IRS and doxing founder Paul Elam. She had also threatened to cause trouble if she got close enough to the conference.

Lissie had apparently raised the funds to travel to Detroit with the help of David Futrelle, a devout feminist and venomous critic of AVfM who writes the blog We Hunted The Mammoth. Upon arrival, Lissie attempted to gain free entry by posing as media and demanding that she be given a press pass. She further insisted that paying to enter would violate her journalistic ethics. Her fraudulent claim and history of antagonism prompted the organizers to bar her from the conference. Oddly, she found her way to a small, impromptu, late-night, post-event gathering consisting of a few of the speakers, some AVfM staff, and others in the lobby of the Courtyard Marriott. Apparently earlier that evening she had been at times flirting, at times provoking and insulting some of the men. Hotel management decided to escort her from the building, and this was the only "incident," if you can even call it an incident, at this event.

I was at this post-event gathering, and it was a lot of fun. In fact it was the most fun I've ever had in a hotel lobby. Early on, around 10 PM, some of us ordered food, which was delivered directly to the lobby from a nearby restaurant. We shared bottles of wine and beer, and Mike Buchanan, a speaker from the UK and leader of the political party "Justice For Men & Boys," generously brought two bottles of Scotch to the table and most of us happily partook. The hotel was absolutely wonderful to us, providing all the glasses and ice we needed. They let us continue our "party" unencumbered until the wee hours of the morning, although I ran out of steam shortly after 3 AM. Other conference members, like Erin Pizzey, Warren Farrell, Anil Kumar, and Barbara Kay, came and went throughout the evening, while filmmaker Cassie Jaye and her Director of Photography, Evan Davies, conducted a lengthy interview of Karen Straughan in a nearby alcove. It was a really fun ending to a very successful and well-run conference. 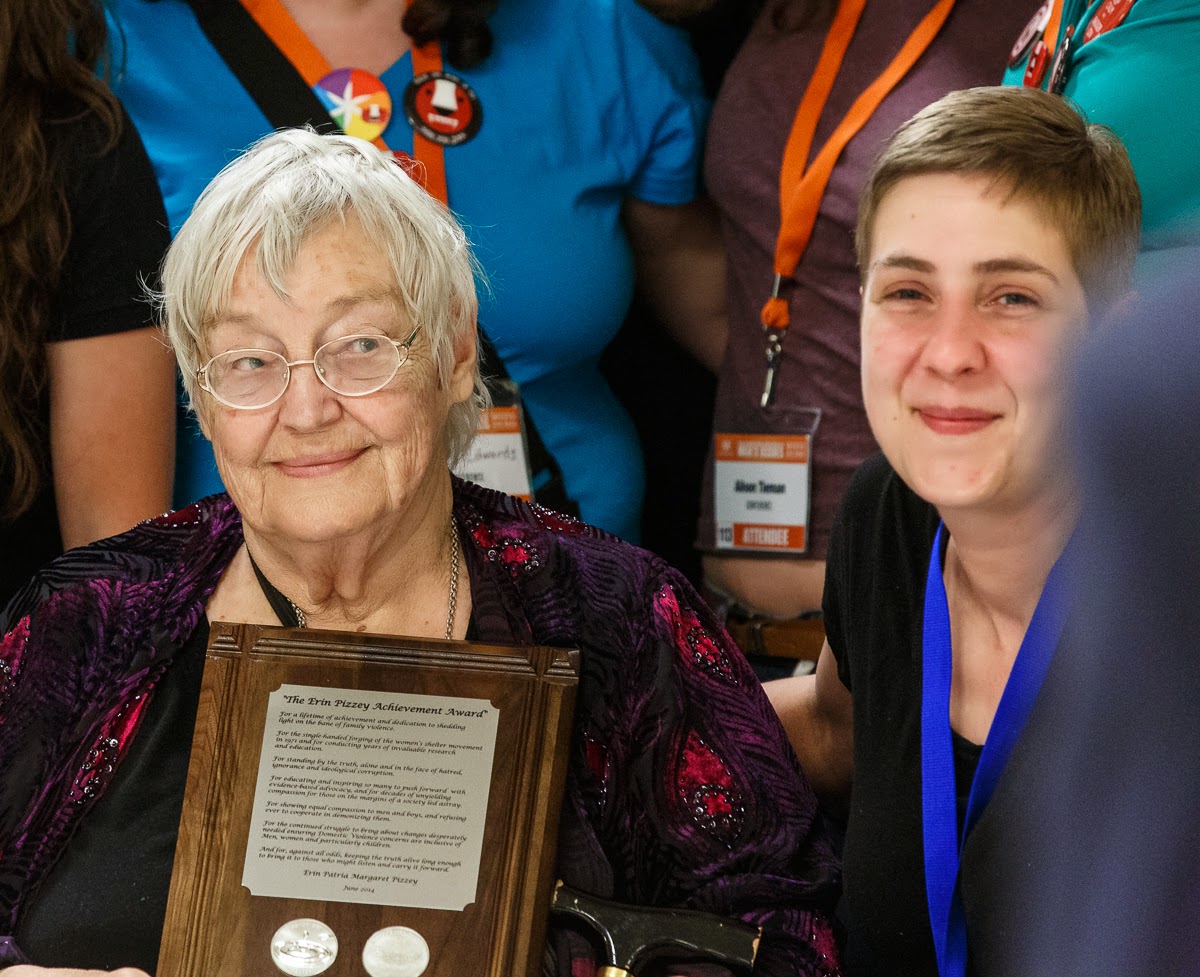 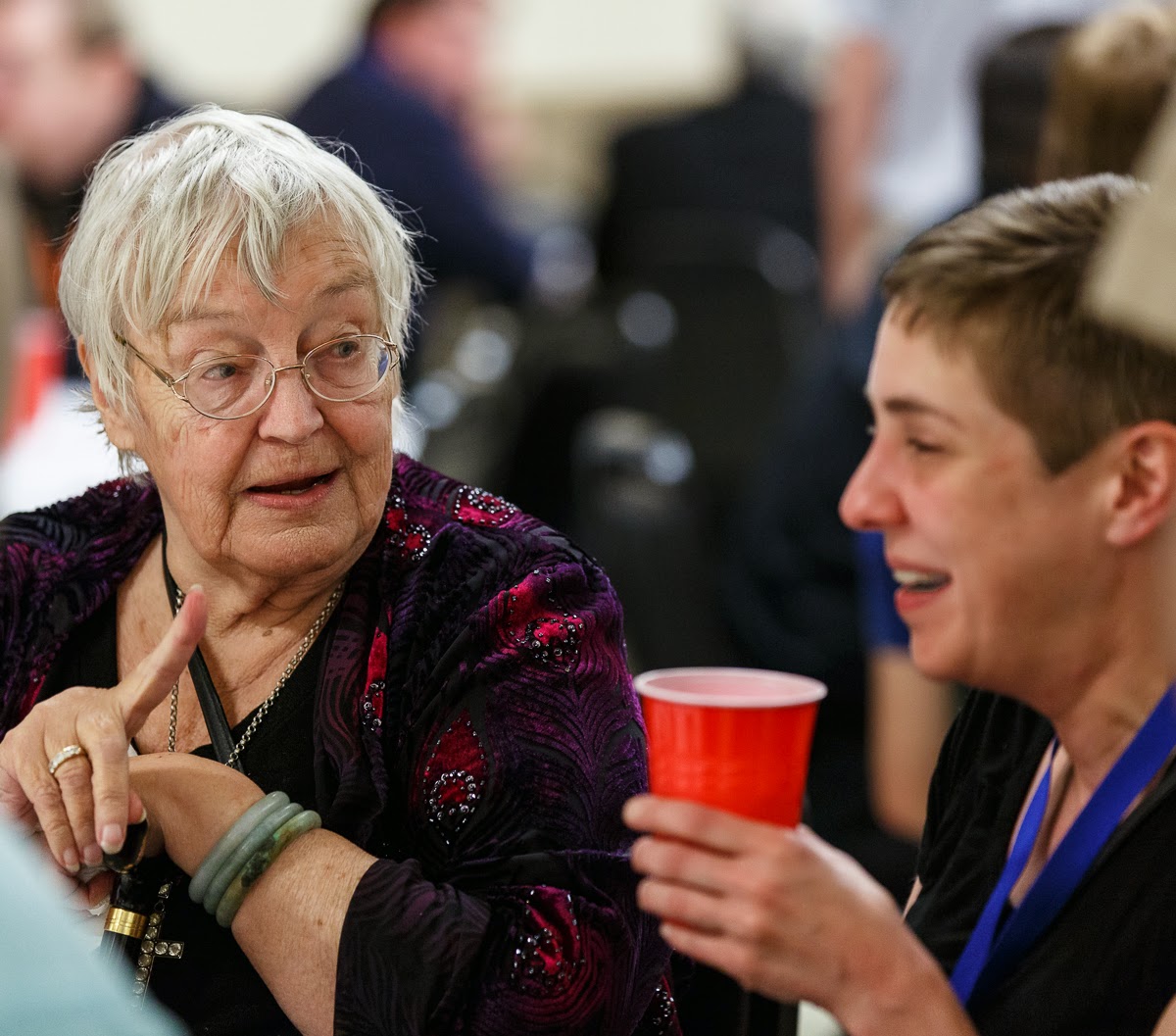 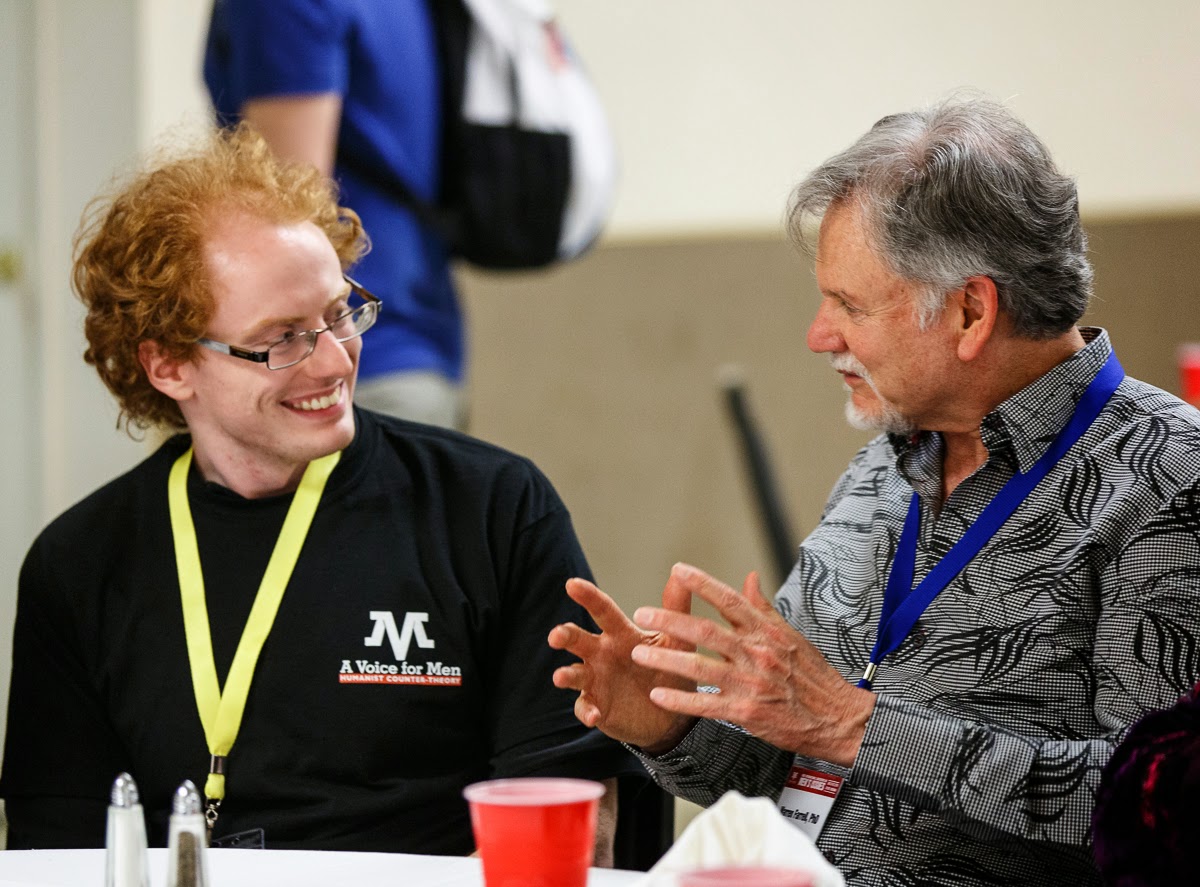 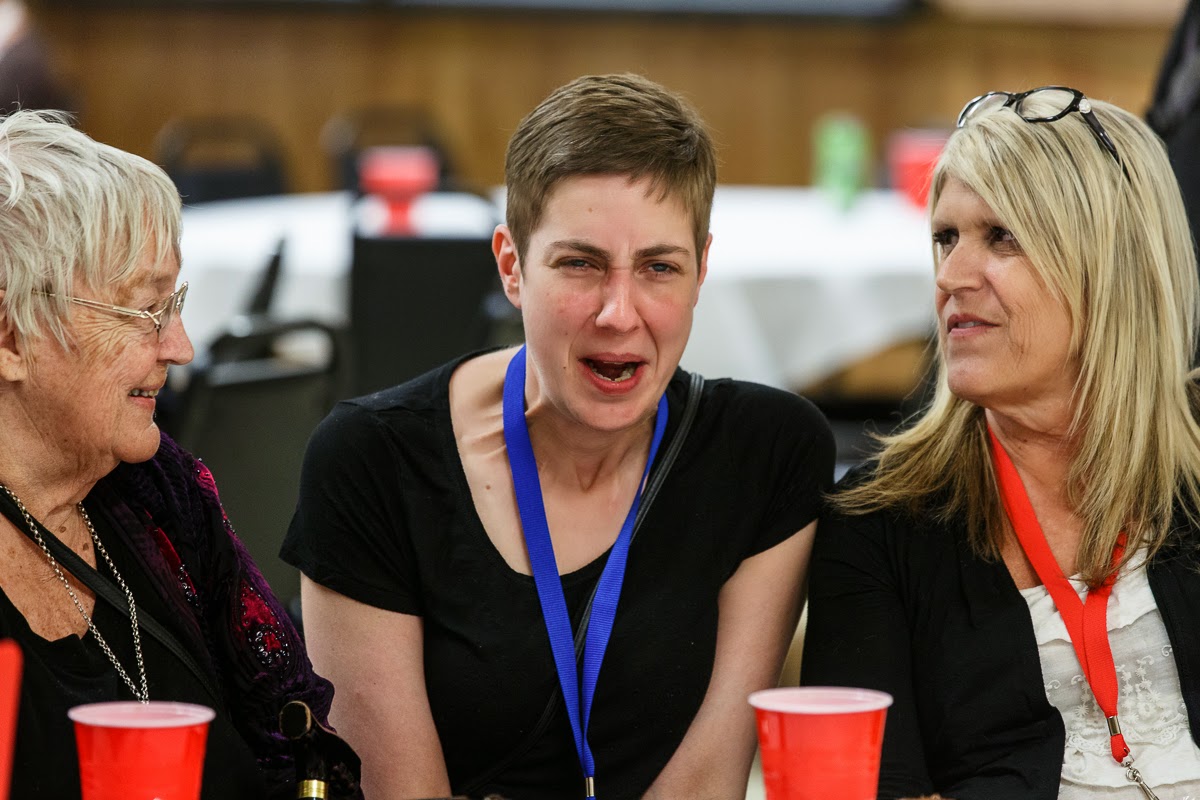 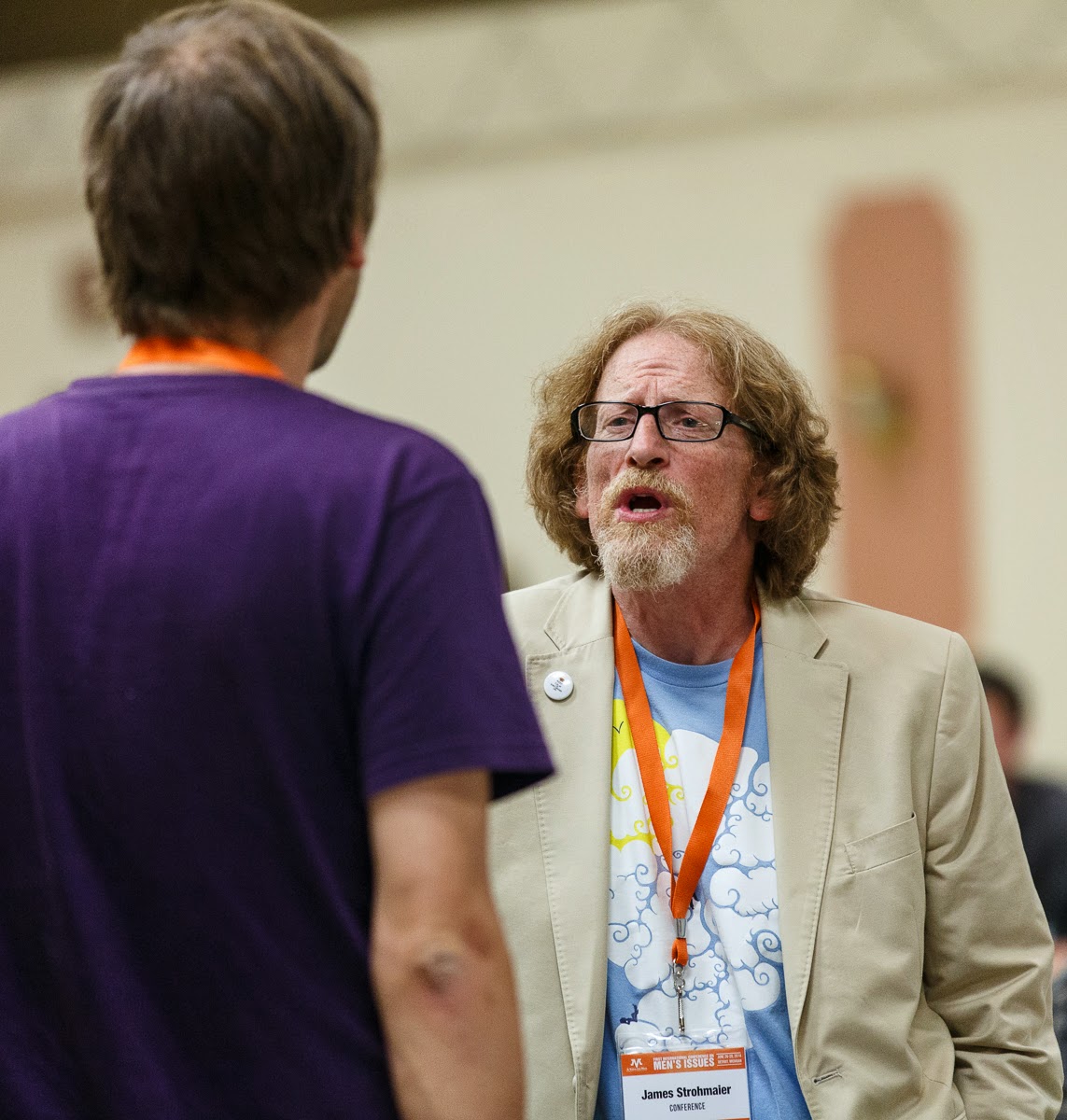 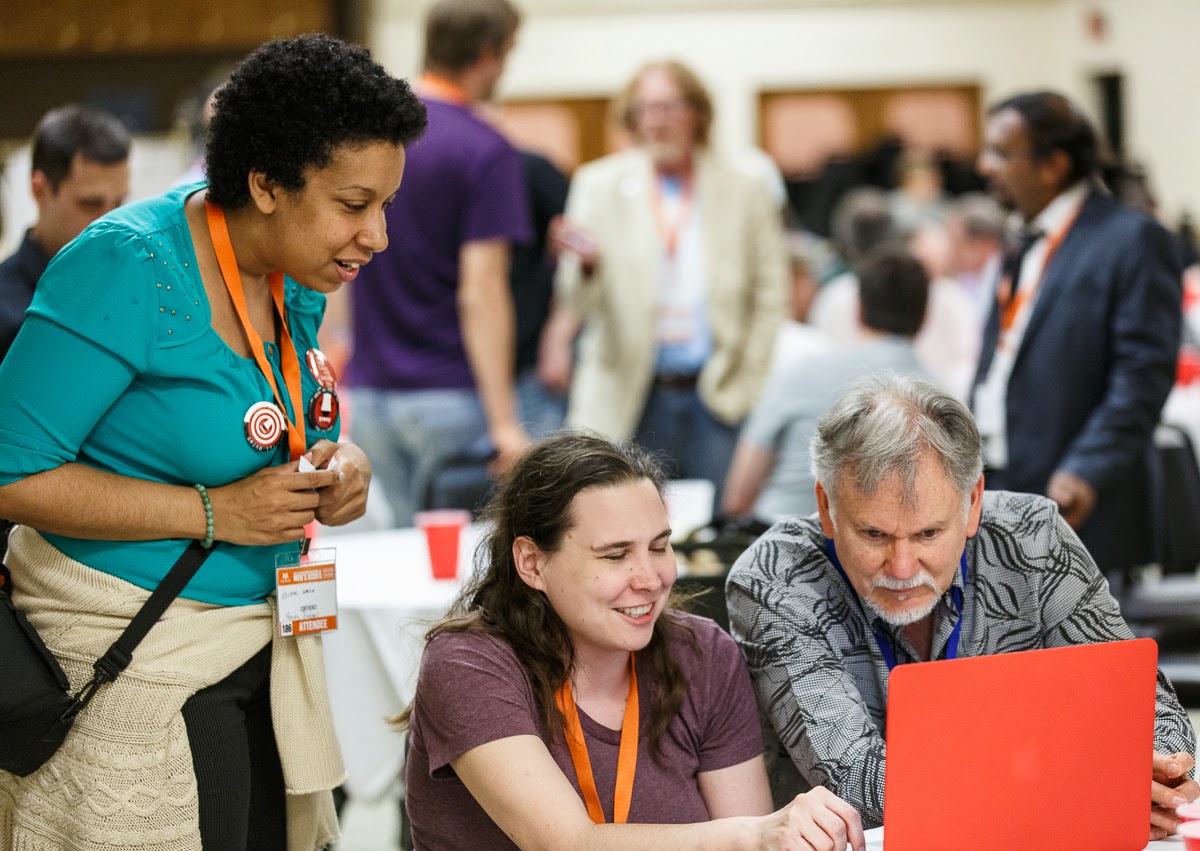 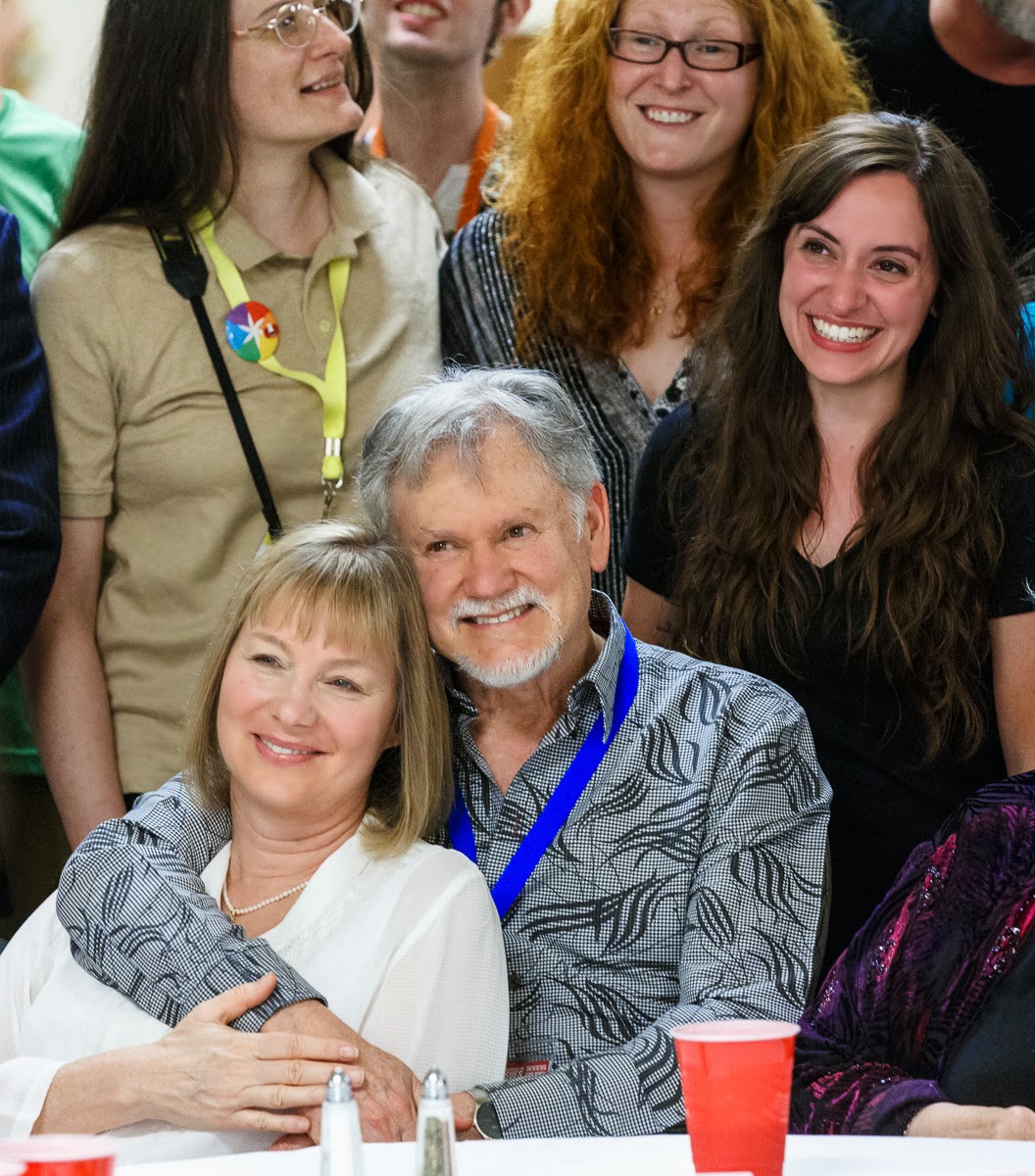