Why I Am an Anti-Feminist - Janice Fiamengo

Many people don’t like the term anti-feminist because it is adversarial, and because feminists have been hugely successful in equating feminism with support for women’s equality. To saythat you are anti-feminist seems to suggest that you are opposed to women’s equality.
But if feminism ever was about equality, it no longer is. In the 21st century, feminism is about special privileges and advantages for women and special exemptions from responsibility.
I am happy to claim the badge of anti-feminism because I object to an ideology and a practice that sets one standard for women—because they are presumed victims—and one, harshly punitive, standard for men—because they are presumedly privileged. All fair-minded people should object to unjust double-standards. The dishonesty and hypocrisy of the feminist movement deserves to be exposed and denounced.
Three things concern me most about modern-day feminism on university campuses.
My first concern is the irrationality that has overtaken academic feminism: it promotes the idea that women’s feelings are more important than objective reality or the search for truth. 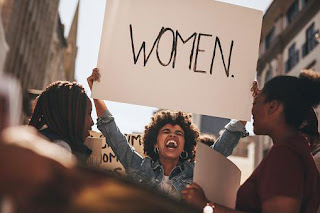 Claiming victimhood now trumps fact, argument, and debate. According to the feminist worldview, women must never be made to feel “unsafe,” not only physically but emotionally and psychologically; they must not be “triggered,” as the saying goes, reminded of trauma or made to think about facts or ideas that challenge their view of themselves as permanently innocent victims.
In the feminist world, women are always to be believed, always deferred to, always spoken of and to in tones of sympathy. Although the idea of protecting women sounds benign, if a bit silly, it has become a potent weapon to intimidate anyone who fails to toe the party line on a wide range of subjects including abortion, gender difference, boys’ education, the criminal justice system, family law, and so on.
When I tried to give a talk at the University of Ottawa in March of last year on the presumed “rape culture” of university campuses—not to deny that rape exists or to say that we shouldn’t care about rape victims, but to argue that it is paranoid fantasy to pretend that our culture condones rape—a group of students took it upon themselves to prevent me from speaking by blowing horns and banging drums and singing the Communist Internationale. Why? Because these students believed they had the right to silence me because what I had to say would have allegedly created an unsafe space for women by denying a bedrock belief of feminism.
If that kind of craziness in the name of protecting women seems like an isolated phenomenon, unfortunately it isn’t. It exists on campuses all across North America, and it is fast making it nearly impossible for anyone to challenge any facet of feminist dogma, and that’s a big problem for academic debate.
My second concern, which is related to the absurd worry about the feelings of women, is the near-total disregard for the concerns and experiences of male students.
Men at university are told in no uncertain terms that they are uniquely guilty, prone to violence, and responsible for war, inequality, rape, domestic violence, pedophilia, sexual harassment, hetero-patriarchal-capitalistic domination, and all that is wrong in society. A young man entering university today soon learns that he is a second-class citizen in terms of rights, financial aid, freedom of inquiry, and social support.
His female colleagues enter a pro-woman campus culture where they see positive images of women in everything from advertising campaigns to course textbooks, where they outnumber their male peers by a significant margin, are taught by pro-feminist teachers dedicated to female success, are provided with women-only spaces to meet, can take advantage of a plethora of special scholarships and bursaries for female students, can access feminist counselling if they so desire, are encouraged to learn about and write papers on women’s achievements and issues, are instructed in righteous anger against the wrongs done to women, can take self-defense classes designed specially for women, are given the opportunity to celebrate female sexuality in campus productions like the Vagina Monologues, and in a multitude of other ways are told that their experiences and concerns matter at the university. 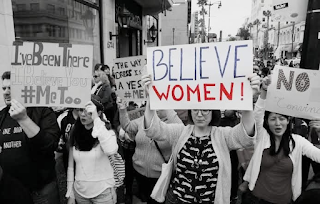 A young man, on the other hand, has a very different experience. He will likely attend a mandatory gender sensitivity and anti-violence workshop at the beginning of his first year where he will be lectured about his propensity for sexual predation. Especially if he is studying in the humanities or social sciences, he faces the prospect of having most or even all his classes taught from a perspective that denigrates the actions and achievements of men. Some or many of his teachers may believe that men too often dominate class discussions and should be discouraged from setting a competitive or adversarial tone. Particularly if the young man challenges feminist dogma, he will often be told that his maleness prevents him from fully understanding certain issues or even having the right to speak about them (women are never told that their femaleness prevents them from understanding or voicing an opinion on issues). A young man will learn that if he wants to be allowed to speak without harsh criticism, he will need to preface many of his comments with an apologetic admission of his male privilege.
He will learn that there are women-only spaces where he must not intrude and female sensitivities that he must not offend. If he wishes to write a paper about men’s problems or perspectives, it is unlikely that he will be encouraged to do so or will encounter an instructor 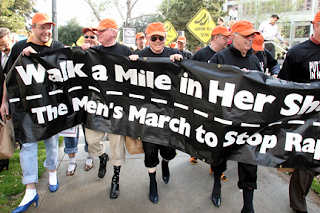 who knows anything about the topic or even believes in its legitimacy. Although men are a minority in many of his courses, he will not find any special scholarships or bursaries to redress the imbalance. If he tries to form a men’s issues club or wishes to meet with other men in a male-only space to discuss his experiences as a man, he will be told that he is a misogynist, that his very presence on campus is a potential threat to women, that the final word on gender has already been determined by feminists, and that he should shut up and listen to women’s accounts and demands.
Hearing such a summation, you might be inclined to think that I am exaggerating, and it is true that not every man will claim the above as his experience, but the structural inequities that I have identified are a demonstrable reality.
My third concern is that as a result of the over-sensitivity to women’s feelings and the knee-jerk hostility or at least indifference to men’s, a host of asymmetrical and unjust policies and practices have been put in place on university campuses, many of which not only sideline men and restrict their right to self-expression but actually threaten their well-being and livelihoods in profound ways.
Most shockingly, a zero tolerance policy for sexual misconduct of even trivial kinds—like crude Facebook posts or sexual jokes—and a manic expansion of the understanding of rape now result in much public breast-beating about male violence and harsh retribution against individual men. Young men who engage in what they thought was consensual sex can find themselves accused of rape because of stringent and bizarre new affirmative consent laws. 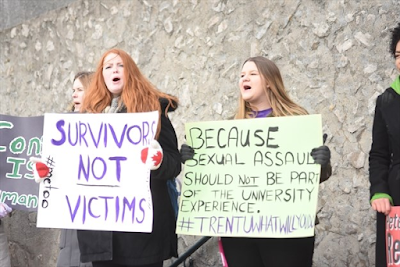 Instead of letting the police and courts deal with such accusations, as they should, most universities have now set up quasi-judicial panels to investigate charges of sexual assault or harassment. The panels are made up of members of the university community with no legal training. The accused is routinely denied the right to counsel, the right to know what evidence has been brought against him, the right to confront his accuser, and other fundamental legal guarantees. And the panels have serious power: men face expulsion, a permanent blot on their academic records, an indelible stain on their reputations, and in many cases the death of their career dreams. It is almost inconceivable that this is happening now in a culture that once prided itself on such principles as equality before the law and the presumption of innocence.

In the name of making the university a “safe space,” we are absolving women of responsibility for their actions and severely compromising the legal rights and freedoms of men. This is a far cry from the individual and sexual liberation claimed by the student radicals of the 60s. Where it will all end is anybody’s guess, but it is clear that the feminist agenda is incompatible with the academic ideal of truth and the social ideal of justice. The obsession on campus with female trauma and male aggression, the constant harping on the need to promote women, salve their wounds, and make up to them for the supposed evils of the past and present—all of these have almost nothing to do with the pursuit of knowledge and are not only a distraction from that pursuit but are actually a serious impediment to it. It is time that people of good conscience took a stand against this corruption of our universities and of our larger society.