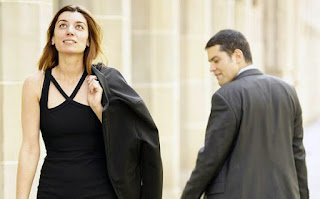 The Ohio State University Harassment Policy includes “staring” (along with “patting” and “hugging”) as offensive actions that can get a man disciplined for such harassment. We might ask: how would the woman know he was “staring” and not just “glancing”? And how would the woman know he was “staring” with sexually predatory intent rather than just trying to figure out whether the woman was someone he’d known in high school? The woman’s feelings determine all, according to received wisdom, and thus there is no defense the man can make.

In a widely publicized 2015 incident, Charlotte Proudman, a British lawyer, made news over her outrage when another lawyer, Alexander Carter-Silk, told her that her photo on LinkedIn was “stunning.” “You definitely win the prize for the best LinkedIn picture I have ever seen,” the man wrote. Proudman went on the offensive immediately, refusing to accept Carter-Silk’s apology and tweeting about his transgression in objectifying her. She went so far as to say that his comment constituted “sexual discrimination”--though she herself, as it later emerged, had often commented on men’s and women’s looks on Facebook, sometimes in the exact same language that Carter-Silk used. But of course, she is a woman and therefore she cannot, according to the feminist definition, be a sexual predator.

Note to men: Don’t apologize in these cases, even if you do feel sorry for what you’ve said or done. It doesn’t help you, and in fact it makes things worse because it is perceived as an admission of guilt, and it encourages your tormentors to continue persecuting you and, emboldened and confirmed, to go after other victims.

A couple of months earlier, a similar outrage over nothing gave me reason to reflect on feminist objections to relatively benign male actions. A headline on Canada’s state-funded online news source, the CBC, caught my eye: “Women Sound the Alarm About Pick-Up Artist on YouTube Site.”

The story reports on a number of women very upset over encounters they have had with a man identified as Luke Howard, who approaches women on the street in Ottawa, engages them in conversation, and then asks for their phone numbers. As the women discovered later, Howard filmed the encounters with a tiny camera positioned in his eyeglasses, and then posted them on YouTube as examples of pick-up techniques men can use to meet women. The idea, he claimed, was to prove that it is not scary to talk to women.

Well, he couldn’t have been more wrong, as it turned out. It is very scary indeed for the man because you could end up with the police knocking on your door to inquire about your predatory and sexist behavior.

One of the women quoted for the article said that she felt “violated” by Howard’s action. "It's almost harassment the way he's doing it," she said. "It makes me uncomfortable, [it] makes me angry because it feels like there's nothing you can do." Rosell Chibambo of the Nobel Women’s Initiative said “The behavior that I saw in those videos is predatory. There’s no other word to describe it.”

Howard’s filming of the women without their knowledge was, in my opinion, unethical. But worthy of jail time or an inflammatory newspaper report? Not in my opinion. He approached women on public thoroughfares in broad daylight. They were free to walk away at any time. Nothing he said to them was at all threatening. But judging from the chorus of outrage in the comments after the story, from both men and women, many found him worthy of the harshest opprobrium. 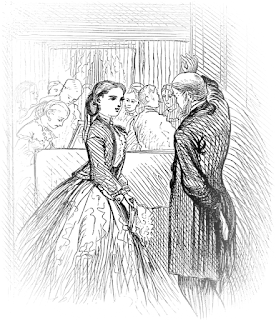 The question of men’s advances and women’s vulnerability has been with us for centuries. In the nineteenth century, a man could not begin speaking to a woman without a formal introduction, and there were strict rules of etiquette governing what questions he could ask her—even whether he could call her by her first name—and strict community punishments for violating such rules.

Perhaps the Victorians understood more about male-female relations than modern feminists do. After all, if there is no difference between men and women, as the feminists tell us, then why are so many women unable to tolerate a look, a compliment, an observation, or a certain tone of voice? The feminist answer would be that it is because we live in a male-dominated culture in which men use rape and the threat of rape to control women. The statistics on rape do not bear out that claim—in fact, data show that sexual assault is a human rather than a gendered problem—but even if rape were more prevalent than it is, there is, or should be, a world of difference between sexual assault and a compliment or an admiring glance.

What is new about all this fuss and worry is the near-absolute credulity of the mainstream press, workplace bosses, and university leaders about the sexual threat involved in seemingly non-threatening actions, and the idea that legal punishment or institutional discipline are necessary responses to female claims of emotional discomfort.

How did we become a society in which a disciplinary tribunal is convened whenever a woman says a man looked at her?

Part of what is going on is the mainstreaming of radical feminist theory, which was first disseminated in elite academic circles, then spread to the front-lines of feminist activism, and finally found its way into police stations, law courts, and the media.

Anyone who studied feminist theory at university from the 1980s onward read or at least heard of film theorist Laura Mulvey on the male gaze. This was the idea that in film, the normative viewer and all the relations of looking are implicitly male. The camera eye is symbolically male, and to understand the intended meaning of the film, one has to adopt a masculine position.

This theory was extended to other art forms and eventually to culture at large, becoming a foundational idea of feminist theory, which posited that all the major institutions of our society are organized to reflect and perpetuate a male view of the world, a world in which men look at women and act on women, and women are passive objects. The male gaze became shorthand for a technology of power to consolidate male dominance.

Whether that was ever true or not, it was a satisfying and memorable way of explaining social relations. The feminist assertion became that the male gaze had to be disrupted. The power to look and to define what one sees had to be taken from men.

Feminists would never, of course, have admitted that what they wanted was to substitute a female gaze for the male gaze. That would be to admit wanting power. They said they wanted a multitude of ways of looking and ways of returning the gaze, a heterogeneous and polymorphous exchange of glances, both literally and metaphorically.

In reality, though, having already defined the male gaze as sexually predatory, demeaning, and objectifying, it was impossible to rehabilitate it. There wasn’t room for any male looking in the feminist utopia.

And we see the results of such feminist theorizing very clearly in the case of our pick-up artist and those who object to him. Whatever this man claims or thought he was doing doesn’t count. He can protest that he loves women. He can protest that he didn’t harm them. His camera eye is seen as the gaze of patriarchal power, a violation and an assault. “He’s a misogynist who thinks women exist in a public space for his consumption,” one woman tweeted, right on script. “Predators are everywhere,” commented another. “A true pig,” said another. And so on.

The project that Laura Mulvey and her ilk began in the 1970s has succeeded, perhaps far beyond what the original proponents imagined.

This is the feminist utopia: a world in which men actually cannot look at women except under circumstances determined by the women.

If the men do look in a way the woman decides is unacceptable, they can be subject to public disgrace, disciplinary proceedings, police visits, even job loss. In the feminist utopia, women are the only ones allowed to look; in fact, they are encouraged to look at men to judge their every move.

As a result, a man has to get used to his every move being assessed for its potential violation of feminist standards. Even when a woman is not looking at a man, he knows she might be looking somewhere, sometime. French theorist Michel Foucault talked about Jeremy Bentham’s Panopticon, a disciplinary regime in which prisoners are aware of themselves as potentially watchable at all times and thus learn to discipline themselves, monitor their own behavior.

The panopticon design is intended to allow a single watchman to observe all inmates of an institution without the inmates being able to tell whether or not they are being watched. Although it is physically impossible for the single watchman to observe all cells at once, the fact that the inmates cannot know when they are being watched means that all inmates must act as though they are watched at all times.

That’s what the feminist regime wants to put in place for men: the Feminist Panopticon, an awareness by men that doing pretty much anything a woman doesn’t like can get them in serious life-altering trouble. Such a situation is bound to make many men wary, uncomfortable, uncertain, fearful, paranoid. And that, of course, is precisely how feminists want them to feel.

The Feminist Gaze sees the world through a grotesquely distorted lens, and the more we allow it to determine law or policies, the more repressive the impact will be.