The Red Pill and Air Travel are deeply connected 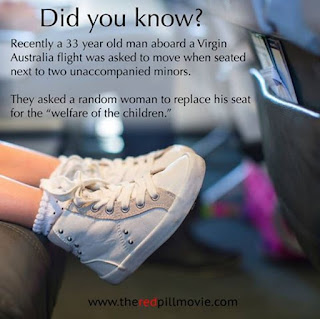 A passenger on a domestic flight in Australia was treated as a threat to children simply because he was male. He was removed from his seat beside a child and replaced with a woman who was equally unknown to the child. If this had been done to a woman we would have seen multi-billion-dollar global movements of outrage, and legislation to make sure that no woman would ever again face such indignity, quicker than a feminist can say "rape cult..."

That men as a class today are treated as a threat to children is not new, almost every man forced into family court so that he can see his own children learns this lesson. But how far will our culture go to segregate men completely out of public life? How far will we go down this road that erases the presumption of a man's humanity and eliminates those small everyday signs that men can be trusted, included and even valued - those everyday things that reinforce a persons sense of his own humanity. How long before large numbers of men internalize the message that they are a danger to others, even their own children? And when a man internalizes the idea that he is bad and dangerous, can we trust him to sacrifice himself for our culture, or should we
expect him to decide that our culture is in fact his enemy? A man who believes he is bad and dangerous will act accordingly (the same applies to a woman, but our culture bends over backwards to interpret all female behavior as good).

Feminists already argue that a man has no right to speak to a woman in public without her permission. Feminists want men restricted to work farms, and reduced to 10% of the population. Not just feminists, but women in general, laugh and applaud when told that another woman cut off a man's penis, because it is already OK to dehumanize males. Feminist lawyers want to close all women's prisons, and Elizabeth Sheehy, University of Ottawa, even wants to prohibit the prosecution of women who kill their husbands. The airline seat incident is but one more example of the assumption that men are dangerous, evil, and undeserving of the label "human," and I am finding new creative examples every day.

Recently I stayed at a hotel in California where men were barred from the spa from 7:30 AM to 6 PM, after which it was co-ed until closing at 10:30 PM. Furthermore, unregistered men were not allowed to look around the hotel/spa unattended, whereas women roamed without restriction. I had to be accompanied by a hotel manager prior to registration. This is the first really clear example of discrimination against males that I've personally encountered at a hotel. I was genuinely surprised, but acted nonplussed. In the morning I really wanted to take a steam bath in the spa before checking out but, despite paying the same rate as female guests, this service was off-limits to me. More on this in the upcoming first installment of videos from my trip to cover the Los Angeles premiere of The Red Pill.

Men are already presumed to be a danger to their own children on the word of the mother despite research showing that children are safer with their fathers and that most murdered children are killed by their own mother. I know first hand the humiliation and soul-damaging awareness that explodes in your mind when the social world surrounding your own child - family court, school teachers, physicians, daycare providers, even strangers - suddenly treat you as a menace and prevent you from seeing your own child purely on the word of a manipulative, vindictive mother. The anger, the insult, the realization that you are NOT an equal citizen, the knowledge that you are not even being treated as a human being, that you cannot see, much less protect, your own child, and that even questionable strangers have more rights to your own children than you ... that ... never goes away. It is a wake up call, and it should make you realize that you cannot trust any of the public "servants" in your own country, that your children are not safe from public servants, that your freedom and your children's freedom is not protected. The public servants in our culture have the power to come between you and your children for absolutely no reason, without evidence or cause, on the word of the mother. Knowing this, we must conclude that our culture has become a tyranny, and we need to dismantle the tyranny.

It is no secret that the dehumanization of males is driven by feminist bigotry and feminist hatred of men, but feminism only gained traction because our culture already had an in-built view of men as utilities first, and human beings last, as articulated by Warren Farrell, Paul Elam, and many others. Feminism took our historical view of males as disposable utilities that can be sacrificed in service of women, and used it as a springboard for a culture-wide war against men, and by extension, a war against all of humanity. Feminism is the tyrant, the multi-headed Hydra, in our cultural moment, and The Red Pill movie by Cassie Jaye is the first theatrically-released feature film that begins to expose the real issues that men face in our increasingly feminist-dominated culture. Don't miss it!