The Incendiary Rage of the Suffragettes

The British suffragettes are now lionized as self-sacrificing activists who won the vote for women in Great Britain. In fact, they probably delayed the granting of woman suffrage with their violence, and they offer a case study in the mass hysteria, longing for martyrdom, and narcissistic indifference to other people that so often characterize dangerous zealots.


From the time of its founding in 1903 until 1914, the Women’s Social and Political Union, the radical arm of the early 20th century British feminist movement, became an increasingly violent organization that distinguished itself from other women’s groups of the time by living up to its ominous motto “Deeds, not Words.” 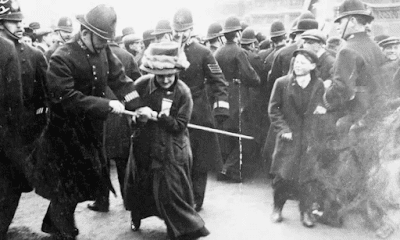 Though now largely remembered for innocuous deeds such as hunger strikes in prison, members of the WSPU were in reality responsible for a bombing and arson campaign that brought enormous destruction and terror across the British isles and involved hundreds of militants. The fact that these women, dubbed suffragettes, believed they could get away with their violence and that they did get away with it—in that they are now widely regarded as victim-heroines—offers shocking proof of the power of feminist ideology, then and now.

The charismatic leader of the suffragettes was Emmeline Pankhurst, a comfortably middle-class widow of a radical lawyer who had grown tired of the slow pace of democratic reform in her homeland. It was irrelevant to Pankhurst that British political culture was undergoing massive democratization and that getting a bill for woman suffrage passed through Parliament was a complicated process. It was irrelevant to her that most working-class men in her country still lacked the right to vote; she wasn’t interested in working-class enfranchisement at all. Moreover, she was indifferent to the issues facing the British government in the early years of the 20th century, which included the threat of civil war in Ireland over Irish independence, colonial rebellion in India, and deep discontent among the working poor.

Pankhurst’s sense of the injustice she was suffering dwarfed all. Under her command, the Women’s Social and Political Union went from heckling politicians and smashing shop windows to the far more belligerent techniques of guerilla warfare that accelerated in the years leading up to the First World War.


Pankhurst and her fanatical followers were so convinced of the righteousness of their cause and so confident that, whatever occurred, they could portray themselves as valiant victims that they seem to have cared nothing about the costs of their incendiary crusade, which included ruinous attacks on centuries-old churches and other priceless historical buildings as well as on countless small businesses and shops; and led to serious personal injuries to the mostly working class men who became their collateral damage.

A full history of the suffragettes cannot be covered here. For a detailed overview of suffragette terrorism, see Simon Webb’s book The Suffragette Bombers: Britain’s Forgotten Terrorists, from which I draw heavily, and William Collins’ video series Centuries of Oppression.

One of the first of the suffragettes’ militant strategies was setting fire to letter boxes and postal outlets; in theory, it sounds fairly harmless. As Simon Webb demonstrates, however, it was both a politically useless and dangerous method of attracting attention (The Suffragette Bombers, p. 41). Suffragettes employed a concoction of phosphorus and sulphuric acid which, when poured into postal boxes, adhered to letters and later interacted with the air to create combustion.

Many packages and letters, in the process of being poured out of bags for sorting in postal offices, suddenly burst into flame. Such fires became common in the years 1912 to 1914, causing painful burns to the hands of postal workers and threatening them with permanent lung damage from the phosphorus. One mailbag on a train compartment exploded with such intensity that the train car began to burn, and a postal worker sustained severe injuries throwing the burning letter bags out of the railway compartment (The Suffragette Bombers, p. 41). 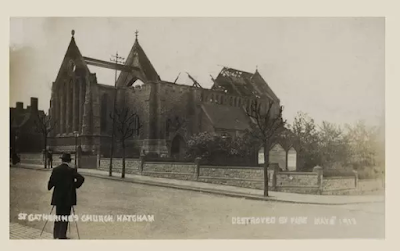 Suffragettes also chose far more spectacular targets, burning many large country homes across England, Scotland, and Northern Ireland. One such target was a house being built for Member of Parliament David Lloyd George, in South-East England. Just before the workmen were to arrive one morning in February, 1913, a bomb brought down the ceilings and blew out the windows (The Suffragette Bombers, p. 44). Many country homes were completely destroyed by suffragette fires.

Historians and commentators, almost all of them sympathetic to the suffragettes, tend to gloss over this violence or omit it from their accounts altogether. Feminist Professor of English Jane Marcus makes not one mention of bombs in her introduction to a book titled Suffrage and the Pankhursts, which glorifies Emmeline and her daughter Christabel, and tells readers that “The real key to the genius of militant suffrage” was the feminist practice of interrupting male politicians’ speeches, which Marcus claims was a revolutionary technique by which each woman learned “not only to speak in her own voice for her own cause, but to split asunder patriarchal cultural hegemony by interrupting men’s discourse with each other” (Marcus, p. 9). An uninformed reader will come away from Marcus’s commentary believing that the suffragettes gained their notoriety entirely through verbal confrontations and self-sacrifice.

More responsible commentators can’t avoid mentioning the bombs, but emphasize that the suffragettes attacked property rather than people—damaging and expensive, certainly—in fact, causing damage in the millions of British pounds in today’s currency--but not first-order violence. Simon Webb points out the dishonesty of such a characterization, noting that if the owners themselves were not in residence in most of the large country houses, many domestic staff members were, living in the servants’ quarters to maintain the properties. Suffragette attacks showed blatant disregard for the lives of these voteless working-class people. Rarely mentioned also are the countless numbers of these servants as well as shop owners, their employees, and other workers who were left without any means of earning a living as a result of suffragettes’ actions (The Suffragette Bombers, p. 42-43). 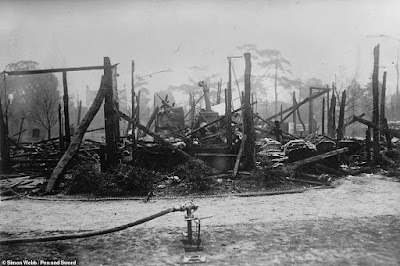 Direct violence against people was part of the suffragettes’ campaign also. In July of 1912, an attack occurred against Prime Minister Herbert Asquith when he was riding in an open carriage through the city of Dublin with Irish nationalist MP John Redmond to commemorate an Irish Home Rule Bill. As the vehicle made its way through the crowds, a suffragette threw a hatchet at Asquith’s face, which sliced through John Redmond’s cheek and ear. On the following day, suffragettes attacked a full theatre in which Asquith was scheduled to speak, pouring petrol on carpets and curtains and setting them alight, and also detonating several bombs (The Suffragette Bombers, p. 61). In 1913, suffragettes attempted to assassinate a magistrate, Henry Curtis-Bennett, with a letter bomb, and when that failed, two suffragettes attempted to push him off a cliff (p. 117-118).

Through all of the destruction of property, threat to livelihoods, and physical harm to innocent bystanders, the suffragettes saw themselves as sacrificial heroines. Like many terrorists, they envisioned their cause as pure enough to justify nearly any level of violence and imagined themselves as martyrs acting out of self-annihilating love.

One of their main aims, in fact, in addition to attracting attention was to provoke—men, in particular—to commit violence against them, and then to publicize the violence. Believing that as women they were involved in what they had named a “sex war” (see, for example, Susan Kingsley Kent, Sex and Suffrage in Britain, p. 158) they wanted that war so blatantly manifested as to be undeniable. They wanted to be able to display for all the world their own suffering bodies. And they were able to in various ways.

As their bombing campaign continued, the public mood not surprisingly turned against the suffragettes, and WSPU meetings began to attract crowds of frustrated opponents. On some occasions, angry crowds seized hold of suffragette speakers, sometimes ejecting them from buildings where they had gathered; at other times pelting speakers with bottles and bricks. In June of 1914, for example, an attempt to hold an outdoor meeting in North London resulted in assaults on the speakers, and eggs and flour thrown at those who had gathered to hear them (The Suffragette Bombers, p. 149). The suffragettes exulted in the opportunity such violence offered. It proved their point: that men were brutes, and that only political power could enable women to purify public life and to protect other women. 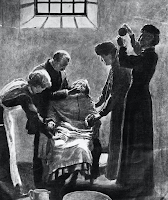 Hunger strikes were another effective propaganda technique. Suffragettes sent to prison for their criminal offences regularly threatened to starve themselves to death in protest. Emmeline Pankhurst herself boasted in public speeches that authorities couldn’t keep her in prison because of her hunger-striking (“Why We Are Militant,” Suffrage and the Pankhurst, p. 162). The authorities were caught in the trap created by the suffragettes’ victimhood posturing. Terrified by the thought of any suffragette dying in prison, authorities enacted counter-measures such as force-feeding or releasing hunger-weakened prisoners until they were well and then re-arresting them, under a law that came to be called the Cat and Mouse Act.

Both of these counter-measures were effectively deployed by the suffragettes against the government. In particular, the image of women being held down and forced to accept a feeding tube became a graphic, grisly illustration of feminine vulnerability and sinister state violence.

Such images were exploited to the hilt by suffragette campaigners and have lived on in the public memory as emblems of feminist heroism.

The most famous suffragette martyr of all was Emily Davison, a graduate of the University of London and a veteran WSPU terrorist. Her activities didn’t stop with hunger-striking or post-box fires. She is believed to have been centrally involved in the afore-mentioned firebombing of the house of politician David Lloyd George, and she was arrested for attacking a Baptist minister at a railway station because she thought he was the hated David Lloyd George. Most famously, she is the woman who was mortally injured as she rushed onto the racetrack at the Epsom Derby in June of 1913 as the racehorses swept by. No one is sure whether Davison was simply intent on a very public and gruesome self-destruction or whether she was trying to grab hold of the reins of the King’s horse, Anmar, possibly to pin a suffragette flag on them (The Suffragette Bombers, p. 80). Whatever her reckless motive, she was trampled under the horse, which somersaulted and landed on top of the jockey, Herbert Jones, who himself narrowly escaped being killed. The suffragettes turned Davison’s funeral parade into a dramatic celebration of her martyrdom, claiming she had been driven to her death by a cruel government. Over the past century, photographic images of racecourse spectacle have become iconic of her tragic nobility. In actuality, Emily Davison was a fanatical, irresponsible, and violent person. 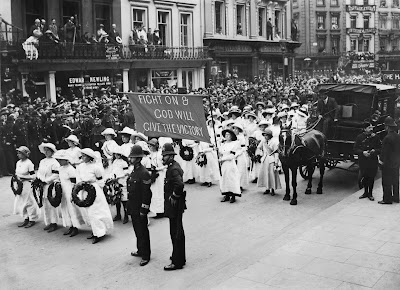 The willingness of other suffragettes to bomb churches and aqueducts for the cause, and a credulous public now eager to see them as martyrs point to the vicious sentimentality and attention-seeking that were integral to this much-celebrated facet of the feminist movement.

Ultimately, the suffragette campaign ended inconclusively with the advent of the First World War. Though the suffragettes were almost certainly responsible for making the suffrage cause less popular and less practical than it would otherwise have been, the suffragettes have been posthumously sanctified as heroic crusaders for justice. Many of them in reality were zealots so obsessed with their own alleged victimhood that they went to war against the working people of their own country and claimed to be doing it for “the betterment of the human race” (“Why We are Militant,” speech by Emmeline Pankhurst, in Suffrage and the Pankhursts, p. 162). One can hardly imagine a more profound delusion, or one more representative of feminist theory and practice.