Monotheistic religions like Judaism, Islam and Christianity worship one God, usually presented as male, but polytheism came first and female deities have been imagined and worshiped in various cultures throughout human history. Greek mythology, for example, describes many including Hera, goddess of marriage and birth, and Athena, goddess of wisdom and intelligence, and Hinduism also describes many goddesses including Saraswati, Goddess of Knowledge.


The Western Goddess movement could be said to have grown along with or even within feminism. Early feminists like Elizabeth Cady Stanton, author of the 1848 Declaration of Sentiments, wrote on the topic but it wasn't until the 1970s and the rise of New Age religions that the Goddess movement really took off, and became an important, but divisive, issue in feminism.

As producer of The Fiamengo File 2.0 on Studio B I want take a moment to comment on the feminist obsession with killing, which is the theme of the next few episodes of our series.

Feminism, being the dark side of female nature floating on a swamp of lies and propelled by the furious envy of men, bends everything it touches towards evil and their usurpation of the mythology of goddesses is no exception. Feminist critics of the movement claim that “Goddess worship leads women to valorize fertility, nurturance and other 'maternal' qualities as 'natural,' universal and static feminine traits.” True to form, feminists can't abide any positive traditional feminine traits, but they can certainly embrace one of the destructive powers of mythological deities: murder.

Feminist theory and activism with respect to reproduction, birth, and death has a strong emphasis on a woman's goddess-like right to kill, beginning with the unrestricted access to abortion – even late-term abortion. Pro-life and pro-choice advocates constantly argue about when a fetus should be considered an individual and therefore protected under the law, but I am not going to enter this argument at this time. I want to use the unrestricted right to abortion as a starting point to discuss the general feminist obsession with the right to kill, which seems unbounded.

Building upon their success with abortion rights, feminists have used the term “post-natal abortion” (Giubilini and Minerva 2012), now referred to as “after-birth abortion,” to hide the fact that they condone the murder of a healthy live newborn baby at the discretion of the mother. Furthermore, the crime of “infanticide,” this weeks topic on The Fiamengo File 2.0,” minimizes the severe evil inherent in a woman's murder of her own children. In England, for example, “although the maximum sentence for infanticide is life imprisonment, in recent years it has become very rare for a woman convicted of infanticide to receive a custodial sentence, except in exceptional circumstances.” In other words a woman will not spend even a day in jail for the murder of her own children, and most Western jurisdictions take a similarly lenient view of this category of murder.

And it doesn't end with children. Feminist murder-lust extends to other males in their lives. Elizabeth Sheehy,

a professor of law at the University of Ottawa, has argued for the Battered Woman's Syndrome defense when a woman murders her husband and it seems that the word of the accused may be sufficient as proof that she was in fact battered. The very existence of this argument suggests that a woman can't be expected to merely leave an abusive partner and so is justified in killing him, and this defense is often successful. Clearly this would never fly in defense of a man who killed his wife. 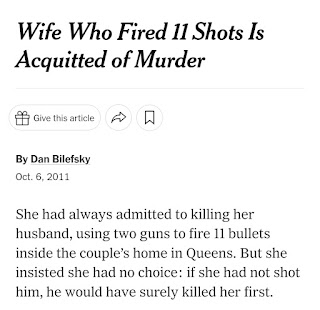 The Supreme Court of Canada, dominated by feminist thought, even stayed the prosecution of Nicole Ryan who persisted for months at finding and hiring a hitman to kill her ex-husband who had already moved to a new town to get away from her. In a culture in which virtually every institution is dominated by feminism we should not be surprised that women are being granted the right to kill almost without limit.

Not satisfied with impunity for specific forms of murder, feminists now want women to be protected from the consequence of any and every crime that they commit, as Patricia O'Brien wrote in the Washington Post: “We should stop putting women in jail. For anything,” arguing in favor of granting the power and immunity of a goddess to all women.

What could explain such lust for goddess-like power over life and death.

The problem begins when women are presented as the creators of life, not just the vessels through which life is renewed in the world. This is an exceedingly important distinction. One can easily argue that a creator has the inherent right to destroy that which she has created, but a vessel is merely the means of delivery and has no rights over that which it delivers. All rights remain with the creator, which is God in the case of life itself.

It seems an odd coincidence that as the power of traditional religion wanes in our culture, feminists have emerged to claim for themselves the right to extinguish life as well as immunity from punishment – the dark and destructive side of a goddess – while denouncing the nurturing, live-giving goddess qualities. This is the behavior that one might expect of a death cult.

One of the fundamental logical errors that allows arguments in favor of a woman's right to kill to succeed is the confusion between creating life and delivering life. We must remember that, as important as is the capacity to give birth, a woman can never be more than the vessel through which new life enters the world. They are not creators of life, and as such have no greater moral right to kill than do men.