In the late nineteenth and early twentieth centuries, Ernest Belfort Bax (1854-1926), a British barrister, philosopher, and journalist, almost single-handedly attempted to awaken the Anglophone world to the danger posed by feminist myths about women’s oppression. Very few listened at the time, and over a century later, Bax’s observations are more relevant than ever.


In 1896 (reprinted 1908), Ernest Belfort Bax published a book called The Legal Subjection of Men, which he co-authored with an anonymous fellow barrister. Based on Bax’s extensive knowledge of British law and court cases, the book was intended as a rejoinder to John Stuart Mill’s 1869 publication The Subjection of Women.

The book began with a caustic reflection on Mill’s feminist legacy, as follows:


"JOHN STUART MILL is dead! but his eloquent wail of the subjection of women is never let die—it rings in our ears every day. It is solemn, it is pathetic; it overflows with the chivalric sentiment which Mill professes to repudiate as out of date […], but which nevertheless is so strongly developed in the average male. It has become the gospel of women’s pretended wrongs, and has caused the youth of Oxford and Cambridge to blush for their fellow males. The only objection that the lawyers of the present year of grace can raise to it is that it is really the reverse of legal truth" (The Legal Subjection of Men, p.1)

Bax set out to rebut Mill’s claims and to loosen their hold on public opinion. He contended that the British legal system was biased, not against women, an “axiom which few people think of disputing” (p. 1), but in favor of women. The bias was manifested in the many crimes for which women had immunity or near-immunity, and in the demonstrably lessened severity with which women were treated throughout the trial, conviction, sentencing, and incarceration phases of the legal system. While feminist advocates evoked male power over women, the fact of the matter was that through the law, “Any woman can at will summon to her aid a power no man can resist [the force of the state]. And behind this force of law rests the equally irresistible force of public opinion” (The Legal Subjection of Men, p. 51). Bax defended his thesis with abundant references to specific laws and court cases that as a barrister with decades of experience, he knew intimately.

Today Bax might seem an unlikely anti-feminist. He was a committed socialist who first came under the influence of the theories of Karl Marx and Friedrich Engels in the early 1880s when he was studying philosophy in Germany. He was presumably familiar with Engels’ feminist arguments, and was well aware that most of his fellow socialists, like other alleged forward thinkers, “were supposed as a matter of course to swallow the conventional lie of modern civilization—the theory of ‘woman the victim of man’s oppression,’” as he wrote in his essay “The Woman Question” published in 1895 in the socialist journal Justice. For Bax, socialism required anti-feminism in the interests of true equality.

In many articles published in journals over a 30 year period and in two book-length publications, he attempted to expose feminism’s conventional lie and to raise awareness of the legal disabilities of men, which he saw as particularly severe in advanced capitalist societies.

In The Legal Subjection of Men, Bax took aim at the much ballyhooed idea of women’s marital enslavement, showing that a good case could be made that it was the husband who did not own his own labor: a wife was legally entitled to her husband’s financial maintenance even if she deserted him without cause. She could not be compelled to return, while a husband who deserted his wife could be compelled, upon penalty of prison or seizure of his property, to pay for his wife’s upkeep no matter her incompetence, insolence, or insubordination. 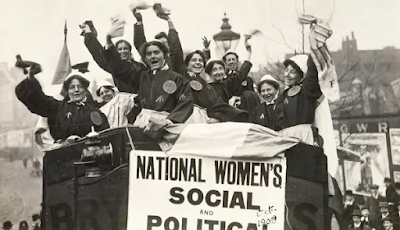 Many offences committed by a wife against her husband were unpunishable by law or were liable to only a light punishment. A wife was free to slander and libel her husband with impunity; whereas if a husband did the same, his wife was entitled to leave him at once and claim support. When it came to physical violence, the discrepancy was even more pronounced.

In Bax’s words: “If a man under any provocation […] strikes a woman, he is sent to hard labour, divorced, and his property confiscated or his earnings hypothecated—and all this through the prompt instrumentality of the police-court. A woman may assault, stab, [or] set fire to her husband, and he has no remedy, except to summon her to the police-court, where, if she be fined, he is compelled to pay the fine, and as likely as not is laughed at. If her crime be revoltingly atrocious, she is perhaps sent to prison—for one-twentieth part of the time awarded to a male offender for a like offence. On her being released, her husband […] is bound to take her back, and, rich or poor, support her” (pp. 17-18). 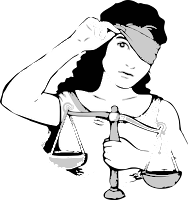 
What was perhaps most bizarre about the present state of affairs was how few people even believed it to exist. Most men were “not conscious of the real state of the law” (p. 51) and a “loud-voiced minority” of women kept alive the myth of their legal wrongs (p. 51). Even men who fell victim to women’s unjust privileges under law tended to keep quiet. As Bax pointed out, “Their friends might believe in their innocence, but their enemies or the public at large would not. The man injured by a woman has no sex-conscious ‘man’s party’ to appeal to” (p. 52).

In conclusion, Bax emphasized how the weight of public opinion and cultural habit approved and exacerbated male disadvantage. “These privileges conferred by the law of England on the woman against the man are […] enforced with rigour that increases every day. Judge, jury, counsel and press vie with each other in driving the iron into the soul of the unfortunate man who is forced to contend with a woman in the law courts” (p. 52-53). And women, in their turn, were being alarmingly corrupted, as he explained:

“Many women who, of their own accord, […] would not think of exercising the force of public opinion or the privileges of a one-sided law against their husbands or other men, are influenced to do so in various ways. The incessant clamour of a hysterical press leads them to suppose that in any quarrel with a man, the man must be wrong, the woman never can be wrong.

The shrieks of the ‘new woman’ propaganda suggest to women that in making most infamous use of her weapons she is upholding the cause of her ‘sisters.’ Furthermore, the new mammon-worship which has infected all modern English life has produced among the average middle-class woman an unspoken theory—that the sole duty of man is to make money for his wife” (p. 54).

Thus, Bax contended, through the vicious circle of repetition, women came to believe that treating men badly was merely just recompense for the centuries of women’s alleged bad treatment, and a credulous public applauded their doing so. 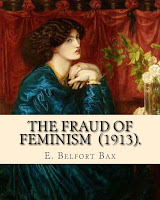 In a later book, The Fraud of Feminism (1913), Bax reviewed and amplified his discussion of women’s legal privileges, showing how women were often literally able to get away with murder, especially when they killed men, especially husbands or lovers, if it was possible, as it almost always was, “to blacken the character of the dead victim” (p. 47)—in other words to make out that he had been rightly put to death.

In cases of sex offences, the same female privilege operated such that “A boy of fourteen years can be prosecuted and sent to gaol for an offence to which he has been instigated by a girl just under sixteen years, whom the law, of course, on the basis of the aforesaid sex privilege, holds guiltless” (p. 38). Such farcical attitudes and sentences were observable throughout the legal system (p. 49), which overwhelmingly refused to hold women accountable for wrongdoing.

Reading Bax’s conclusions today, one is struck by the similarity of his findings to those of esteemed Professor of Law Sonja Starr, who published a major article in 2012 finding significant gender disparities favoring women at all stages of the criminal justice process in the United States. But were things truly as uniformly bad for men as Bax claimed?

Bax’s arguments are not easy to confirm empirically, because though he referred to many individual cases in his writings, he did not provide enough detail for their independent verification, and it would require extensive research into the history of legal judgements and court cases in 19th and early 20th century England to come to a firm judgement.

But to my knowledge, Bax’s arguments have never been disproved, and moreover his general assessment of his society’s credulity toward pro-feminist claims, especially men’s part in furthering male disadvantage, is stunningly prescient:

[He wrote that] “Whatever may be the explanation, and I confess I cannot find one completely satisfactory, the fact remains. A Woman’s Movement unassisted by man, still more if opposed energetically by the public opinion of a solid phalanx of the manhood of any country, could not possibly make any headway. As it is, we see the legislature, judges, juries, parsons, specially those of the nonconformist persuasion, all vie with one another in denouncing the villainy and baseness of the male person, and ever devising ways and means to make his life hard for him. To these are joined a host of literary men and journalists of varying degrees of reputation who contribute their quota to the stream of anti-manism in the shape of novels, storiettes, essays, and articles, the design of which is to paint man as a base, contemptible creature, as at once knave and imbecile, a bird of prey and a sheep in wolf’s clothing, and all as a foil to the glorious majesty of Womanhood [….] By these means, which have been carried on with increasing ardour for a couple of generations past, what we may term the anti-man cultus has been made to flourish and to bear fruit till we find nowadays all recent legislation affecting the relations between the sexes carrying its impress, and the whole of the judiciary and magistracy acting as its priests and ministrants.” (The Fraud of Feminism, p. 32).

In other words, everything in the culture conspired to demonize and belittle men, and men themselves were enthusiastic participants in the delusion. Bax was alarmed at the readiness with which otherwise intelligent men allowed their judgement to be “completely hypnotised by the adoption of the Feminist dogma” (p. 45).

Bax’s conclusion to the book forecast the coming ascendency of a hypnotically irrational wave of anti-male, female supremacist public sentiment that would carry all before it.

Unfortunately, it was in the very nature of hypnotic waves of feeling that they were impervious to reason. “You may show conclusively that facts are opposed to the assumption; that, so far from women being oppressed, the very contrary is the case [….] it is all to no purpose” (p. 87).

In the end, Bax had nothing to offer but a thin hope that empathetic reason would prevail, that even men deeply sympathetic, as so many were, to the cause of women would “take pause and reconsider” in light of the many provable dishonesties and irrational anti-male presumptions of feminism. It was a thin hope indeed, and more than a century later, Bax’s appeal to men’s reason and justice remains largely unanswered so far.