Were Marx and Engels Feminists?

One of the fundamental works of 19th century socialism took the Marxist analysis of workers under capitalism and applied it to the position of women in the family—with a lasting impact on feminist ideology.


In her book on the history of the nineteenth-century women’s movement, feminist Susan Kingsley Kent notes that “In their discourse on marriage, feminists borrowed terms and concepts utilized in discussions about the political economy of Victorian England” (Susan Kingsley Kent, Sex and Suffrage in Britain, 1860-1914, p. 85).

Though Kent does not specify where such borrowings originated, feminists’ economic language was often heavily indebted to the Communist writings of Karl Marx and Friedrich Engels, especially Engels’ book The Origin of the Family, Private Property and the State, which was first published in German in 1884, based on manuscripts by Marx that Engels discovered amongst his friend’s papers after Marx’s death in 1883.

Engels’ book, which provided a historical survey of different types of family and clan formations, was considered a pioneering work of anthropology, and was allegedly described by Vladimir Lenin, first leader of the Soviet Union, as “one of the fundamental works of modern socialism.” 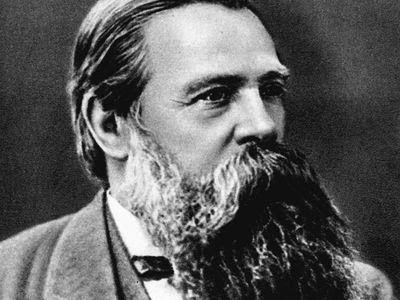 Engels’ book was not translated into English until 1902, but even before then its general ideas circulated throughout the Anglosphere and found a receptive audience amongst feminists, especially in their vehement denunciations of marriage slavery.

When suffragette Christabel Pankhurst wrote in 1913 that “Those who want to have women as slaves, obviously do not want women to become voters” and also that “The opponents of votes for women know that women, when they are politically free and economically strong, will not be purchasable for the base uses of vice” (in “The Great Scourge and How to End It,” from Suffrage and the Pankhursts, p. 189), she was almost certainly reflecting Engels’ repeated claims about the “sex slavery” of women.

In his outline of the development of the modern family, Engels alleged that women had once held powerful and respected roles in earlier matriarchal societies, but that their power had been degraded under capitalism; and he called for the liberation of women from their economic subordination to usher in a new era of sexual freedom.

In the decades immediately following the book’s publication—and continuing until our present day—feminists seized on the idea of female “sex slavery” in the same inflammatory terms conceived by Marx and Engels. A full history of the Marxist influence on feminist ideology is beyond the scope of this essay, but a couple of examples will suggest its impact. Later essays in this series will pursue the subject further.

The nineteenth-century British novelist and essayist Mona Caird (1854-1932) is now recognized as a radical theorist of female sexual emancipation. Fluent in German and an avid reader of books related to women, she almost certainly knew Engels' work.

In the summer of 1888, four years after the publication of Engels’ book, Caird gained notoriety by publishing a condemnatory essay on “Marriage” in the Westminster Review, a British journal of political and social commentary. The essay, later reprinted in Caird’s book The Morality of Marriage (1897), alleged that marriage was nothing more than “sex slavery” for women by which “Year after year, women are ruined in body and soul” (The Morality of Marriage, p. 87). Only when marriage became a simple contract dissoluble at will would women be liberated from their degradation.

Like Engels, Caird argued that marriage customs were historically determined rather than natural and therefore could be changed. She gave examples of women’s alleged power in earlier societies, such as that of the Etruscans, and linked the modern form of marriage to the rise of capitalism whereby women

In modern marriage, she argued, a woman was merely “the drudge and child-bearer of a man” while being “bought and sold” like cattle (83).

Caird also compared marriage to prostitution, calling prostitutes “despised women who preferred, of the two alternatives offered to them by society, the degradation outside marriage to the slightly different and more approved form of degradation within it” (83). Claiming that “hard work without its rightful recompense of independence” was “the definition of slavery” (84), she defined women as a particularly degraded type of slave.

A cursory glance at Engels’ The Origin of the Family, Private Property, and the State shows the extent of feminist rhetorical borrowing about female marital enslavement. In his chapter on “The Family,” Engels consistently linked the position of women in bourgeois marriage with the position of oppressed workers under capitalism, asserting that “The modern individual family is based on the open or disguised domestic enslavement of the woman […]” and he specified that “In the family, [the man] is the bourgeois; the wife represents the proletariat” (The Origin of the Family, p. 80).

As would become commonplace in feminist discourse, Engels compared the bourgeois wife to a prostitute, arguing that the wife was in a worse position than a prostitute because her subjugation was even more total: the wife “differs from the ordinary courtesan only in that she does not hire out her body, like a wage-worker, on piecework, but sells it into slavery once for all” (78).

At other times, Engels preferred the language of slavery to that of prostitution. With the rise of capitalism, he claimed, “The woman was degraded, enthralled, the slave of the man’s lust, a mere instrument for breeding children” (67).

Like the feminists with whom he co-created a store of images and ideas about female oppression, Engels did not consider for a moment that there might be humane reasons such as economic security, domestic stability, lasting companionship, and especially the creation of a home for raising children that made marriage an honorable arrangement entirely different from prostitution. For Engels, the only justification for pair bonding was what he called “sex-love,” and he demanded the complete economic emancipation of women so that sex-love could be pursued without shame and without any binding commitment.

He asserted that it was wrong to remain in a marriage once sex-love had faded, and he prophesied a liberated future in which couples could form and reform their sexual associations in blissful freedom. After all, as he said, “A definite cessation of affection, or its displacement by a new passionate love, makes separation a blessing for both parties as well as for society. People will only be spared the experience of wading through the useless mire of divorce proceedings” (87).

He did not, of course, consider the effects of such casual dissolutions on children because, in his utopian theorizing, children would be raised by the community at large rather than by their parents, and therefore would be hardly affected by their parents’ changing sexual arrangements.

Engels’ position on women in marriage was primarily influenced by the anthropological analysis of a progressive American scholar named Lewis Henry Morgan (1818-1881) who wrote extensively about the social organization and family relationships of the Iroquois people of North America.

In 1877, Morgan had published a book based on his studies called Ancient Society, or Researches in the Lines of Human Progress from Savagery through Barbarism to Civilization. According to Morgan, human social development evolved in distinct stages from hunter-gathering through settled agriculture to urban civilization. As these stages emerged, different social rules governed the relationship between men and women in families. 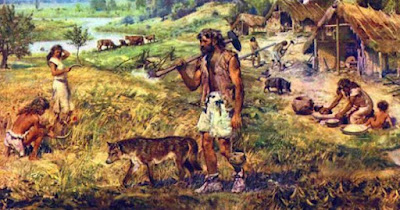 According to Morgan, ancient proto-societies were matriarchal and relatively egalitarian as well as more sexually free. But the shift toward an agricultural society led men to seek power through conserving agricultural surplus, and women were forced to bear more children to work the land. Then, as production moved away from the home in more complex societies, women lost their centrality to the household economy. The dominant power of men was established and women were demoted to drudgery.

The solution to oppression offered by Engels and by feminists like Mona Caird in the late nineteenth century seemed relatively straightforward: economic opportunities for women, and independence from male demands through easily obtainable divorce and mothers’ legal guardianship over children.

Much feminist discussion from the late nineteenth century up to and including the present has been preoccupied with the demand for female economic and sexual empowerment—which abundant welfare policies and decades of preferential hiring still have not satisfied; while the actual desires of ordinary women and men, and the needs of children, continue to be largely ignored. Metaphors of degradation within the family remain central to feminist writings.

In 1963, a professional Communist propagandist named Betty Friedan (1921-2006) hid the reality of her long-time writing career and her Marxist affiliations in order to present herself as an ordinary American housewife who, after years of silent suffering, was confessing her and her fellow suburban slaves’ longing for self-fulfillment. Her book was The Feminine Mystique, now considered the origin point of

the 1960s women’s movement, in which Friedan lamented that despite the many options technically open to them, women in bourgeois capitalist society had mistakenly decided to “trade in [their] individuality for security” (240), consciously choosing “that which in many cases her grandmother saw as a blind fate and her mother as slavery” (260).

Friedan could no longer claim, as had earlier feminists, that women were forced into the “slavery” of marriage. All professions were open to them, as she admitted. But in hundreds of expertly sourced pages, Friedan offered an explanation for women’s disastrous choice of domesticity: the relentless propaganda of what she called the Feminine Mystique, the brainwashing of women to believe that what they had to want was to be housewives and mothers, which according to Friedan were deadly dull occupations which left many intelligent and educated women feeling empty and soulless.

Updating the Marxist language of sex slavery and prostitution, Friedan claimed in 1963 that the modern American woman’s suburban house was “in reality a comfortable concentration camp” (369) where women had become “dependent, passive [and] childlike” doing housework and childcare that was “endless, monotonous, [and] unrewarding” (369). She admitted that American women were “not, of course, being readied for mass extermination” but she insisted that they were “suffering a slow death of mind and spirit” (369), the only remedy for which was economic and sexual independence, to “live their own lives again according to a self-chosen purpose” (372). Whether men’s work was fulfilling and satisfying—or whether it was often even more “endless, monotonous, and unrewarding”—of course never entered her discussion.

Early feminist Mona Caird and Second Wave leader Betty Friedan shared an insistence on women’s rights and male responsibilities to accommodate them. Neither commentator gave any attention to the real experiences or needs of men—who were not acknowledged to have legitimate needs—or of children. Faith in women’s superior ability to determine what was right for others was always an unquestioned tenet of what we might call the feminist mystique.

In Engels’ formulations of marriage under capitalism, we see clearly formed many of the standard elements of the feminist position in its self-righteous simplicity; these included the idealization of more primitive, allegedly matriarchal, social structures, complaints about the degradation of women as men’s sex slaves, the equivalence of marriage with prostitution or other forms of soullessness, and the asserted need for revolutionary change to empower women sexually.

Marx and Engels were not the first to articulate these ideas, but there is no doubt that The Origin of the Family, Private Property, and the State embraced feminist critique as a core tenet of Communism and that its influence on later feminist thinking has been profound and lasting.